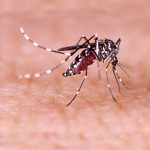 Zika virus is spread to people through mosquito bites. Spread of the virus through blood transfusion and sexual contact have also been reported. The most common symptoms of Zika virus disease are fever, rash, joint pain, and conjunctivitis. The illness is usually mild with symptoms lasting from several days to a week. Severe disease requiring hospitalization is uncommon and fatalities are rare. An increase in Guillain-Barré syndrome was noted during an

On January 29, 2016, the CDC issued Interim Guidelines for the Evaluation and Testing of Infants with Possible Congenital Zika Virus Infection on January 29, 2016 in MMWR and updated guidelines on February 19, 2016. Pediatric health care providers should work closely with obstetric providers to identify infants whose mothers were potentially infected with Zika virus during pregnancy (based on travel to or residence in an area with Zika virus transmission), and review fetal ultrasounds and maternal testing for Zika virus infection.

Zika virus testing is recommended for:

For infants with laboratory evidence of a possible congenital Zika virus infection, additional clinical evaluation and follow-up is recommended. As an arboviral disease, Zika virus disease is a nationally notifiable condition.

Visit the CDC’s website for fact sheets, resources, and more.

Zika Guidance for Physicians/Healthcare Providers in Georgia can be found here.